Last week was Teacher Appreciation Week. The administration and many parents helped tell our teachers “Thank You!” This has been a tougher year than normal for our teachers with COVID and remote teaching while still teaching in the classroom. While many teachers around the country refused to return to the classroom, our teachers have stepped up to the plate and hit home runs. Last week we posted a link for you to recognize and thank teachers. Please take a moment to post some thank you’s for your student’s teachers. Click on this link: Teacher Appreciation.

Lingo Networks recognized three of our teachers in April and has given them gift cards to a local restaurant. We join Lingo in lifting up three teachers who go above and beyond in their dedication to our students:

Once again, Dr. Jackson has excelled in teaching science to students in an intellectually-challenging and motivating manner, and he continues to make himself available during and beyond school hours to students who need additional academic attention and also for mentoring and encouragement. Additionally, he has volunteered for extra duties that were needed this year to deal with logistical challenges thrust upon us by COVID-19 and has been one of the most flexible teachers in responding to the many changes to plans throughout this school year.

Mrs. Yeomans sets the bar high in leadership and instruction. She makes learning math challenging and achievable at the same time. She is a favorite of students because of her dedication and imaginative approach to math. To add to her teaching expertise, she stepped up to fill a huge need as our MS Dean of Students. In this role, she is sensitive and understanding of our Middle School students. She is a bold and forward-thinker who recognizes issues quickly and resolves them before they develop into problems.

In her second year of teaching for GCS, Mrs. Jones has already demonstrated dedication to her craft and an outstanding flexibility in meeting students where they are. When asked to teach four subjects to two grades this year, during a COVID year, she not only agreed but exceeded all expectations in the classroom while incorporating students with learning differences. She has challenged her students intellectually and created a thirst for knowledge while teaching a combined classroom with in-class and online students simultaneously. Mrs. Jones is a valuable asset to our community, and we are thrilled to have her. Hope in the MisInformation Age (Part 2)

Hope in the MisInformation Age (Part 2)

“Always be prepared,” Peter says, “to give an answer to everyone who asks you to give the reason for the hope that you have.” Who’s asking you that question?

In the misinformation age, there’s no shortage of access to information, opinion, and speculation on every subject, issue, and idea in our world. We’re only a few words in a search engine away from knowing something about anything. But where do we turn for hope? Peter assumes that people turn to Jesus’ followers and will inquire about the reason for their hope. He also assumes that Jesus’ followers are living in such a way that their hope is obvious, even if the reason isn’t. I don’t mean to be harsh, but I wonder if the church today might have a different dilemma: we tend to be prepared to give an answer to a question that no one is asking. If no one is asking about the reason for our hope, then perhaps our hope isn’t obvious.

Here’s a challenge from Lesslie Newbigin: “We must live in the kingdom of God in such a way that it provokes questions for which the Gospel is the answer.” What does that look like in our day?

It looks like being in a community of believers committed to one another in love where each is preferring the other’s needs. Everyone is well-supported and taken care of in a community where each one is looking out for the needs of everyone else because each self-giving individual is being supported and taken care of by any number of other self-giving individuals. You’ll be asked about that.

It looks like living in a quiet trust and confidence in the goodness and faithfulness of God when things in your personal life haven’t gone the way you expected. We mourn over any number of things, but we do so as people of hope. In a world without hope, someone will ask you about that.

What might it look like for you to live in such a way that your life “provokes questions for which the Gospel is the answer”? Ask the Lord what that should look like in your own life, and go confidently forward in those things. But be ready; someone might ask you about it.

Hope in the MisInformation Age (Part 1)

Hope in the MisInformation Age (Part 1)

Sometimes you read or hear something that strikes you and then doesn’t leave you. It comes to mind again and again, and it forces you to deal with it rather than just thinking it’s nice. I want to share, what was for me, one such quote. But first, some introduction.

How do you feel after reading the news, watching the news, or talking about the news? Overwhelmed? Discouraged? Infuriated? Betrayed? Do you feel as if things are politicized to the point of hurting relationships? Are you ever struck by the thought that with all the information we have, very few of us can do anything meaningful on a national or global scale? Even if the average person knows and understands all of the cultural and political dynamics of everything that’s going on in our world, what good is that?

In an often referenced statement from 2 Chronicles 12:32, we’re encouraged to follow in the way of the sons of Issachar who “understood the times.” Understanding the times is certainly important, but that dynamic isn’t the primary thing that the sons of Issachar brought to the table. Yes, they understood the times, but in the not-so-often referenced part of the verse we find out that they had “knowledge of what Israel should do.” Their understanding came with a knowledge of what God’s people should do. That’s wisdom, and that’s something lacking in our information age … or it misinformation age?

Does our accumulation of information come with knowledge and wisdom? Does it lead to deeper, more meaningful relationships? Or does it tend to be a burden that has damaged relationships or discouraged people who should be full of hope? Does the information that we tend to gather help us be people of hope in a world in pain and confusion? Does our light stand out in the darkness?

Here’s the quote that struck me and has stayed with me. This is from New York pastor Jon Tyson:

“One of the challenges for every Christian is that of misinformation: we know everything about that which we can do little about and we know little about everything we can do everything about. Rather than aiming to influence people far and wide, perhaps we should turn our attention to the seemingly mundane around us where we can actually have impact.”

Do I understand the times? I think so. We’re living in a broken world, but it’s the world where Jesus rose from death. It’s also the world in which He is King and is making all things new! All the news headlines fall under that banner. Do I know what God’s people should then do? I think so. We walk with Jesus in such a way that we faithfully live out our calling in the world: reflecting His love, wisdom, and care into the environment and people around us. What kind of world might we live in where Jesus’ followers are all doing that? Maybe we are a force in this world after all.

6 comments
Marie Masincup says:
Amen, Brian. Thank you!!
Jeremy Vogan says:
Good words, thanks brother JV
Marilyn Knopp says:
Thank you, Brian. This is a very important reminder to look for those people and opportunities the Holy Spirit brings across our paths everyday for us to sow life and hope into.
Jason Ralston says:
Brian, this blog is one of your best thus far. Thank you for sharing your heart and Biblical perspective. I'd like to piggy-back on your bold statement, "I have come to realize and appreciate that I’m a much more inspired and hopeful person when my eyes are focused on those things that the Lord has called me to, rather than focusing on those things that He hasn’t." Focus is the enemy's primary tactic and battlefield. This is why Jesus, Paul, and Jeremiah (just to name a few) made their respective statements of 'seek first,' 'forget what is behind and reach forward to those things ahead,' and being 'single-minded.' As you stated perfectly, if we focus on the things Jesus has called and equipped us to fulfill, then what follows are joy and being effective in our world. Lastly, the opposite is true; if our focus is scattered and on the things of this world, then the enemy wins. What our focus is on is where our faith will be.
Brian Fitzgerald says:
Thank you all for the encouragement. Jason - good word, brother!
Julie Yeomans says:
Very encouraging and refreshing to focus on what the Lord has called us to rather than focus on what he hasn't. Thank you.

In Exodus 35, Moses called on the Israelites to give as their hearts stirred them to the construction of the Tabernacle and its furniture: “All the men and women, the people of Israel, whose heart moved them to bring anything for the work that the Lord had commanded by Moses to be done brought it as a freewill offering to the Lord” (Exodus 35:29). The people gave from their hearts and not from a requirement.

In Exodus 36, Moses had to proclaim that the people should not bring any more, because there was enough material given to complete the Tabernacle. This is what Paul was addressing in 2 Corinthians 9:6-8:

The point is this: whoever sows sparingly will also reap sparingly, and whoever sows bountifully will also reap bountifully. Each one must give as he has decided in his heart, not reluctantly or under compulsion, for God loves a cheerful giver. And God is able to make all grace abound to you, so that having all sufficiency in all things at all times, you may abound in every good work.

Thank you for giving bountifully to this year’s auction! Three years ago, every family was required to give a donation to the auction. We began phasing this out last year, and this year, giving was voluntary. We had as many items for the auction as we have had in the past, because you gave cheerfully. And they were beautiful and given from the heart.

This does not even include giving to the Bid for Cause. As a school, we have exceeded all expectations. We will begin the upgrades soon, and they will continue through the summer. The school is also investing in a new phone system (the current system is on its last legs) which will tie into the security and safety upgrades, giving us a modern and first-class security system. 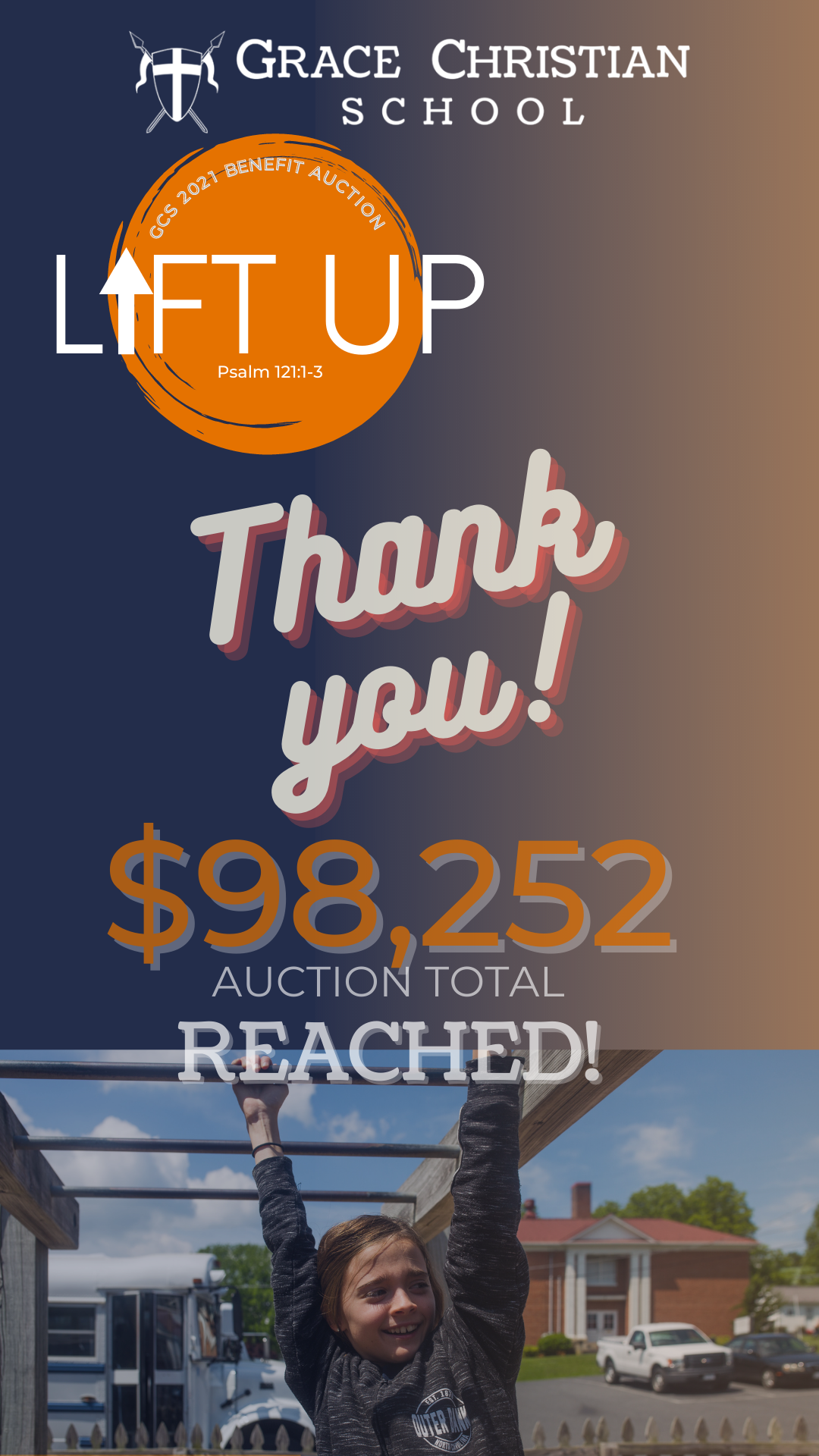